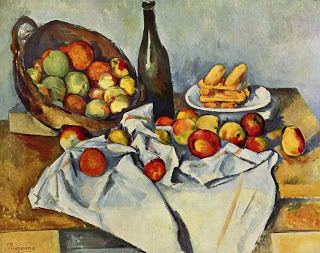 Standing in front of Cezanne canvas is confronting reality in the most clear-cut way. A Cezanne is stark, solid and well defined to the maximum extent possible. In a world where communicating the artistic  intent in a roundabout way is treated as clever and sublime, Cezanne chose to dig art by conveying presence through solidity. He agonizes ‘to realize his sensations’. His sensation is not a fleeting stimulus but a weighted optical whole that has a concrete richness with tangible attributes that challenge the artist to realize them on canvas. Cezanne feels almost a moral imperative to scrupulously realize that presence.
Like his art, Cezanne is a solid presence. There is very little in modern art after him that has not reckoned with him. Cubism may be most open about its debt to Cezanne but Cezanne was ‘father of it all’ as famously stated by Matisse. When Lucien Freud struggled to bring lardy nakedness out of his portraits, he was facing the same moral imperative of solidity as Cezanne. Even Andy Warhol, in his choice of presentation over representation was echoing Cezanne.  It is common knowledge that his so-called ‘geometric works’ fed into Cubism. However, it was his meditation on presence that attracted Cubists who, in turn, were also obsessed with bringing out all facets of reality.  It is documented that Picasso bought a lithograph of ‘Large Bather’ when he was working on ‘Les Demoiselles d’ Avignon.’ He was not referring to the ‘geometrical works’ when he said “it is Cezanne’s anxiety that is most interesting.” More on this later. Braque was more detailed in his assessment of Cezanne’s influence on the movement that he co-founded. Braque said “The discovery of his work overturned everything….I had to rethink everything. There was a battle to be fought against much of what we knew, what we had tended to respect, admire, or love. In Cézanne’s works we should see not only a new pictorial construction but also – too often forgotten – a new moral suggestion of space.”  Pithiness of this observation lies in capturing the moral dimension of Cezanne’s obsession. 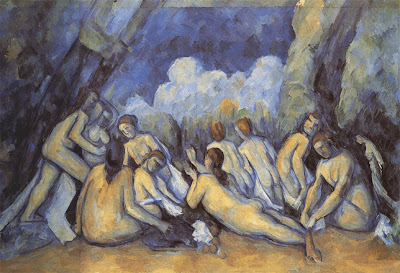 Coming back to Cezanne’s anxiety, this anxiety is a critical part of the moral dimension. In an oft-quoted remark to his son six weeks before his death, Cezanne said “I must tell you that I am becoming, as a painter, more lucid in the presence of nature, but with me, to realize my sensations is always painful. I cannot achieve the intensity that manifests itself to my senses; I do not have the magnificent richness of coloration that animates nature.” Cezanne’s anxiety- his desperation for expression or a yawning gap between feeling and realization was defined by critic Robert Hughes as ‘ the scrupulousness of a genius without facility’ and was elevated to the level of ‘the touchstone of the modern consciousness.’  Hughes too detects the moral dimension in Cezanne’s struggle. He writes “his painting was a moral struggle in which the search for identity fused with desire to make the strongest possible images of the other – nature- under the continuous inspiration and abomination of an art tradition that he revered.” 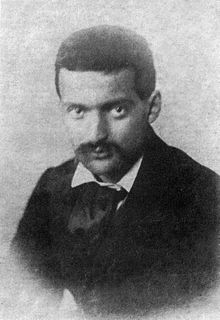 Development of Cezanne’s art makes for a fascinating reading. His origins had very little art. In Aix-en-Provence, where he was born in 1839 it was as non artistic as was possible in the France of the day. His father was a laborer turned  hatter and, eventually, a banker. He (the father) was convinced that his son was not a fool and was surprisingly supportive of his son’s artistic plans.  From 1852 to 1858 young Cezanne studied humanities at the College Bourbon in Aix, where he met his lifetime friend, Zola the writer. Ironically in college, Cezanne used to win all literary awards and Zola was winner in the arts competitions. After that he studied law for a while, but under Zola's constant encouragement he turned to painting. By 1861 both young men were in Paris. 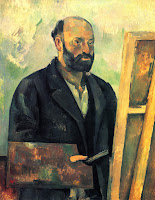 His fascination   with ‘presence’ found its natural expression in his genius as portraitist. Starting with 1869-70 portrait of his painter friend Achille Emperaire he went on to become one of the best portrait artists of all time. His self portraits ‘invite comparison with those of Rembrandt, and the best of them justify it’. Like everything Cezanne, his portraits assert their pictorial distinctiveness with every fiber of their being. Subjects of the portrait emerge as ‘fully formed’ to take their space and cut out any confusion that can lead to dilution of clarity of structures. ‘Realization of sensation’ is foregrounding of the syntax of presence. Hughes nails Cezanne’s  pursuit of chiseling out the reality of his local mountain- Mont Ste- Victoire. I will reproduce this biggish paragraph so as not to dilute the astute observations of the critic.  “Each painting attacks the mountain and its distance as a fresh problem. The bulk runs from a mere vibration of watercolor on the horizon, its translucent, wriggling profile echoing the pale green and lavender gestures of the foreground trees, to the vast solidarity of the Philadelphia version of Mont Ste.-Victoire, 1902-06. There, all is displacement. Instead of an object in an imaginary box, surrounded by transparency, every part of the surface is a continuum, a field of resistant form. Patches of gray, blue and lavender that jostle in the sky are as thoroughly articulated as those that constitute the flank of the mountain. Nothing is empty in late Cézanne — not even the bits of untouched canvas. …. His goal was presence, not illusion, and he pursued it with an unremitting gravity. The fruit in the great still lifes of the period, like Apples and Oranges, 1895-1900, are so weighted with pictorial decision — their rosy surfaces filled, as it were, with thought — that they seem about twice as solid as real fruit could be. … The light in his watercolors (perhaps the most radiant exercises in that medium since Turner) is not just the transcendent energy, the "supernatural beauty" of abstraction; it is also the harsh, verifiable flicker of sun on Provençal hillsides. To his anguish and fulfillment, Cézanne was embedded in the real world, and he returns us to it, whenever his pictures are seen.”  It is this struggle of realizing those sensations on canvas that makes Cezanne so enduring. 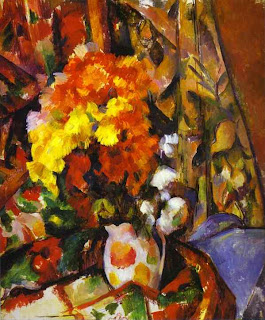 Durability of Cezanne’s appeal is also due to comprehensive nature of success. He is relatively rare in achieving maturity of multiple aspects of his artistic genius. When his influence on later artists is talked about, mostly the reference is to some particular aspect which was picked by the artists and taken to new heights. In Cezanne we find realization of many aspects- coloration, form, drawing, texture, modeling and expression. His monkish dedication to his art and ability to avoid self-destructive impulses, so common to his era, led to a certain ripeness and heft to his output. This ripeness lent sufficient complexity to his work that enabled later artist to pick and choose from a masterly weave of fully realized fields. Softly dazzling aura of his watercolors, stoic weightiness of his still life or unmistakable ‘presence’ of his portraits is grand enough to be a foundation of separate schools. Here too, his achievement was embedded in a moral dimension as noted by Meyer Schapiro “he was capable of an astonishing variety. This variety rests on the openness of his sensitive spirit. He admitted to the canvas a great span of perception and mood, greater than that of his Impressionist friends. This is evident from the range of themes alone; but it is clear in the painterly qualities as well. He draws or colors; he composes or follows his immediate sensation of nature; he paints with a virile brush solidly, or in the most delicate sparse watercolor, and is equally sure in both. He possessed a firm faith in spontaneous sensibility, in the resources of the sincere self. He can be passionate and cool, grave and light; he is always honest.” Cezanne was always direct and agonizingly moral. ‘Frankness of his means’ coupled with his dedicated search of the pure form took him to a pedestal which is reserved for the epoch-makers. 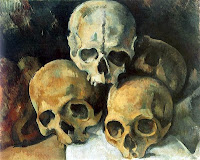 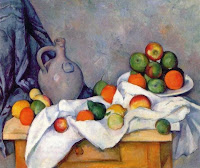 Robert Hughes has written “it may be that Cezanne was reaching for a kind of expression in painting that did not exist in his time and still does not in ours.” His desperation for expression and ‘sensitive spirit’ was looking for a new sensibility. Despite ripeness of his output that search remained unfulfilled. This unfulfilled search for a new sensibility is what that makes him ‘Patriarch of Modernism’. His sensibility was beyond his facility as bemoaned in his last letter to his son while describing the pain of realizing the sensations. He kept his agony from turning self destructive and that allowed him to practice his craft at a level which was heroic enough to open the floodgates of modern art.  True modernism is a search, not a point, in art history.   The fact that Cezanne remained unfulfilled is a testimony of his humanity and his greatness. 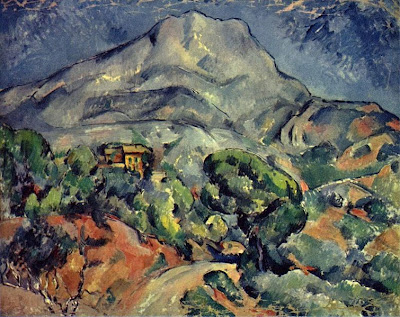 -Dhiraj Singh
Posted by Dhiraj at 2:15 AM