Normal Pathology of The Fall 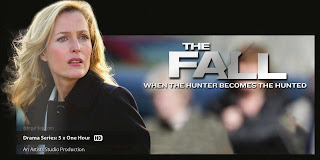 The fall (BBC 2 starring Gillian Anderson and Jamie Dornon) is now two episodes old and has making of a great complex psychological drama.  The Allan Cubitt’s new drama is a serious affair with brilliant performances and uncompromising portrayal of evil.  It is a difficult viewing which is scary rather than repelling.  An overhang of violence or implicit threat has not been achieved by gore and blood but situating evil in boring sedate reality.  This ordinariness of the evil is compounded as camera refuses to turn away from ‘really’ uncomfortable issues.
“The basic story of the series is that of two hunters: a serial killer on the loose in Belfast and the police officer who is tasked with stopping him. The first hunter is a man by the name of Paul Spector (Jamie Dornan); a serial killer who happens to be a grief counsellor by day. The second hunter is Detective Superintendent Stella Gibson (Gillian Anderson- she of X Files). Gibson, an officer from London’s Metropolitan Police Service, is an old acquaintance of PSNI Assistant Chief Constable Jim Burns (John Lynch), who calls her in to do a 28 day review of a murder case which has stalled. While reviewing the case she comes across two cases which she believes are linked and were committed by the same individual and, after convincing Burns of that fact, abandons her review to head the inquiry into the serial killer on the loose in Belfast.” (from TVwise review of the The Fall) 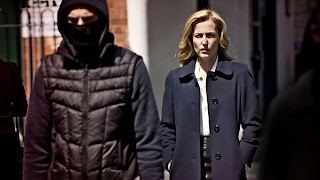 Serial killing is by definition sadistic i.e. killing for pleasure and, moreover, the victim has done nothing to earn her (mostly it is a she) fate except to conforming to some characteristic that triggers the evil in the psychopath.  In popular culture it has been used extensively however, almost always, a distance has been created by situating the evil in something exotic.  Audience differentiate themselves from serial killers in more fundamental ways then just degrees.  They normally don’t see themselves on the same continuum and serial killers are given enough ‘quirks’ to make them a different species altogether.  But not here.  Proximity with the evil has been achieved not only with camera dwelling lovingly on the brutality but also the calm way in which the killer goes about his business at the crime scene.
More than this longish stay with the brutality, it is the context in which the killer has been put.  Jamie Dornan’s Paul Spector gets his menace quotient from the scenes in which he is placed in normal family life and a routine day job.  Busy thrum and stress of the domesticity only adds to the normalcy of the circumstances.  There is nothing extraordinary about the stress that he faces in his everyday life.  He may not be cheerful but how many of normal people are?  Still, there is no doubt that he is evil.  Domesticity is a backdrop that props up his darker side.    Use of deviant situations in routine everyday life creates an unease which does more to establish the dark canvas then the conventional mores  of suspense genre. 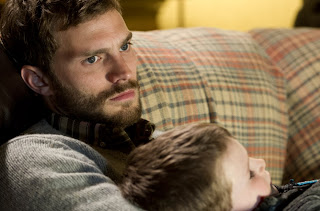 In one scene we meet Paul in his role as a grief counselor and find him asking probing questions to his clients. Occasional diversion   in the sexual territory will not be noted, but from him it raises some antennas. Later we catch him making inappropriate drawings while the mother talks of death of her child.  Other uneasy situations involve children near perilous situations.  He hides his gear in the false roof right above his son’s bed, adorned with whatever children’s rooms are adorned. His daughter gives a jaunty family performance while he gets distracted by the news item about his previous kill. Inappropriate behavior of the teenage babysitter and her vulnerability in the presence of cold blooded psychopath keeps us on edge. In a later scene, camera follows the young daughter moving towards the room where Paul is wrestling with the babysitter.
These situations firmly established the perverse nature of the landscape.  However, the perversity never crosses the line to become otherworldly.  It always remains within the overall parameter of normalcy: just a point on the continuum where we all can see ourselves.  Somehow, it always appears that this evil is possible for any one.  Even the audience cannot rule itself out.
Another effective trick was a juxtaposition sequence in the beginning of the second episode.  In the sequence camera alternately shifted between domineering lovemaking between DSI Stella and one of her subordinates and the languid perversion of the killer in which he ‘poses’ his victim with elaborate tenderness. The sequence serves to blur the boundaries of perverse behavior of a serial killer and seemingly normal behavior of DSI Stella.  In short, intense atmospheric shots are used to stunning impact to give the series its calm eerie texture. 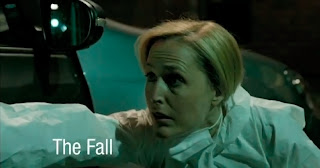 Performances are top notch. Gillian Anderson is effortless in conveying her haughtiness, maverick tendencies and a very strong personality. She uses the full weight of her personality to get what she wants – whether it is the attention of a good looking cop or to be lead investigator in a case. Above all she conveys her capabilities and vulnerability with great facility without making too much song and dance about them. The Fall achieves its status of being “perfect means of exploring the banality of evil, the nature of obsession, and the niggly-squirmy minutiae of everyday”  by devoting equal time to the hunter and hunted. Jamie Dornon is playing the creepy with a surefootedness of a  pro. He is able survive long sequences without belaboring the point of his evil still conveying the full horror of his ‘normal’ pathology.

-Dhiraj Singh
Posted by Dhiraj at 2:33 AM