Marcello Mastroianni : A Seductive Look at The Inner Reality of Life 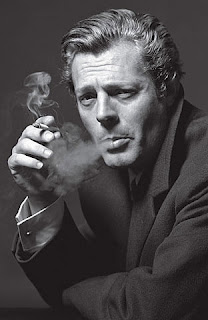 Marcello Mastroianni’s easy charm was an ideal vehicle for portraying decadence. His nonchalant air was redolent with womanizing and sex. However this decadence was aloof. It rarely expressed itself in unabashed glee. A more likely expression was an amused shrug and resigned surrender to the demands of hedonism. He lived this charming persona, redefined it time and again and completed the continuum by parodying it. Ranked among the most charismatic personalities of the cinema history, Marcello Mastroianni became “the exemplar of modern man facing the existential void. ” His effortless portrayal of insecurities, cravings and doubts without taking away the star appeal is almost a cinematic motif. He was the original pretty boy with enough talent and acting arsenal to break the veneer and delve into the deeper and uglier recesses of characterization. Somehow, his beauty never made him superficial.

Mastroianni worked with the titans of European cinema: Antonioni, Ettore Scola, Luchino Visconti, Pietro Germi and Vittorio de Sica. The movie that sent his career soaring was 1960's "La Dolce Vita," “a bitter ode to contemporary decadence.” Mastroianni later said “In 'La Dolce Vita' I found my first real role where it was all me," It was followed by "8-1/2," Fellini's autobiographical film about the director's creative block and romantic follies. Mastroanni was now officially Fellini’s alter ego. Onward march of decadence continued in Antonioni's "La Notte" in 1962. Mastroianni as the foolish lover began with "Bell'Antonio" in 1960 and continued with "Divorce Italian Style" in 1962 and his first Oscar nomination. Continuum was complete with parody of his strongest stereotype.

With Fellini his relationship was intense and personal. The auteur extracted some of the best work from the actor. In an interview before his death in 1993, Fellini is reported to have said that Mastroianni's talent was not as unstudied, as natural, as he sometimes made it seem. ''The legend that Marcello is indifferent or lazy is nonsense..... he spends hours discussing his role until he thoroughly understands it, extracting the most extraordinary nuances. When he has it inside him, and he trusts his director, we can get what we're really after: a look at the inner reality of life,'' said the great director. 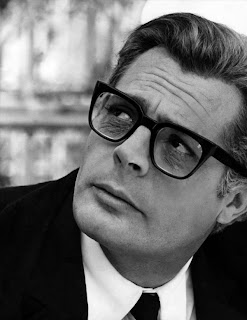 He was offered good roles and he made most of it. He was agile in grabbing the opportunities offered by richly written roles. This grabbing, however, was never laboured. Mastroianni’s laid back air was never truly ruffled. The New York Times film critic Vincent Canby wrote: ''One of the qualities that Mr. Mastroianni has as performers-- and something that, perhaps, all great performers share -- is a way of presenting the surface characteristics of a role (the gestures, expressions, language) while also somehow making a comment on those characteristics.'' Mastroianni was moving with still air but he was furiously painting rich landscapes of emotions.

His good looks and diffidently romantic charms created a persona of a consummate ladies man often referred to as ‘Latin Lover’. Fellini used this to his advantage by creating a man grappling with the existential demands that a life style and world view woven around pleasure entail. His highly publicised affairs with the leading beauties like Faye Danaway and Catherine Deneuve fuelled the image. He had a daughter, Chiara, born in 1972 with Catherine Deneuve. They separated a few years later but remained friends. Deneuve and their daughter were at his bedside when he died in 1996. He was always dismissive of this image. He took roles of suicidal homosexual, parody of romance, old man craving and not getting female attention. No star with Casanova pretensions will take up this callous a destruction of such a lucrative and universally admired iconography. Furthermore, he remained married to Flora Carabella for a very long time. In a tribute Charles Taylor wrote “the joke of Mastroianni’s Latin lover persona is that his performances, and his presence in “I Remember,” reveal a man more given to a shrug than a rapacious gaze, to being the pursued rather than the pursuer. Has any actor ever combined bewilderment and gentle irony as Mastroianni did?” Italians, who knew better, were more dismissive by calling him ‘Mama’s boy’. 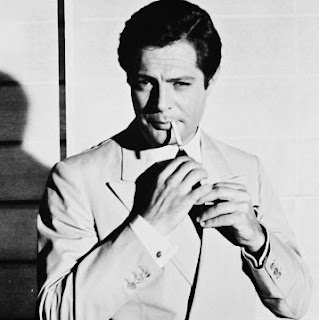 His pairing with Sophia Loren has an enduring appeal. "Chronicle of Poor Lovers," in 1954, his first film opposite Loren, made him a star in Italy. The complemented each other beautifully. “He was cast in the deliciously funny three-part sex farce Yesterday, Today, and Tomorrow and the equally amusing sex comedy Marriage Italian Style. In both these films, Mastroianni's masculinity blends perfectly with Loren's exuberant earthy personality.” Their screen couple appeared in 10 films “in which they came to symbolize the common Italian man and woman -- married or in love.” Loren is reported to have said : "These kind of things are really magic in movies. I think it doesn't happen very often, but me and Marcello (had it) since the beginning." 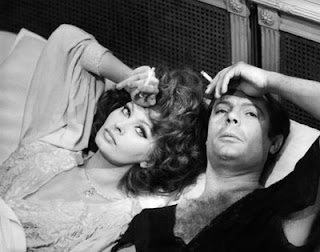 Then there was pair of those liquid dark eyes, with all the wistfulness packed in such a seductive package.